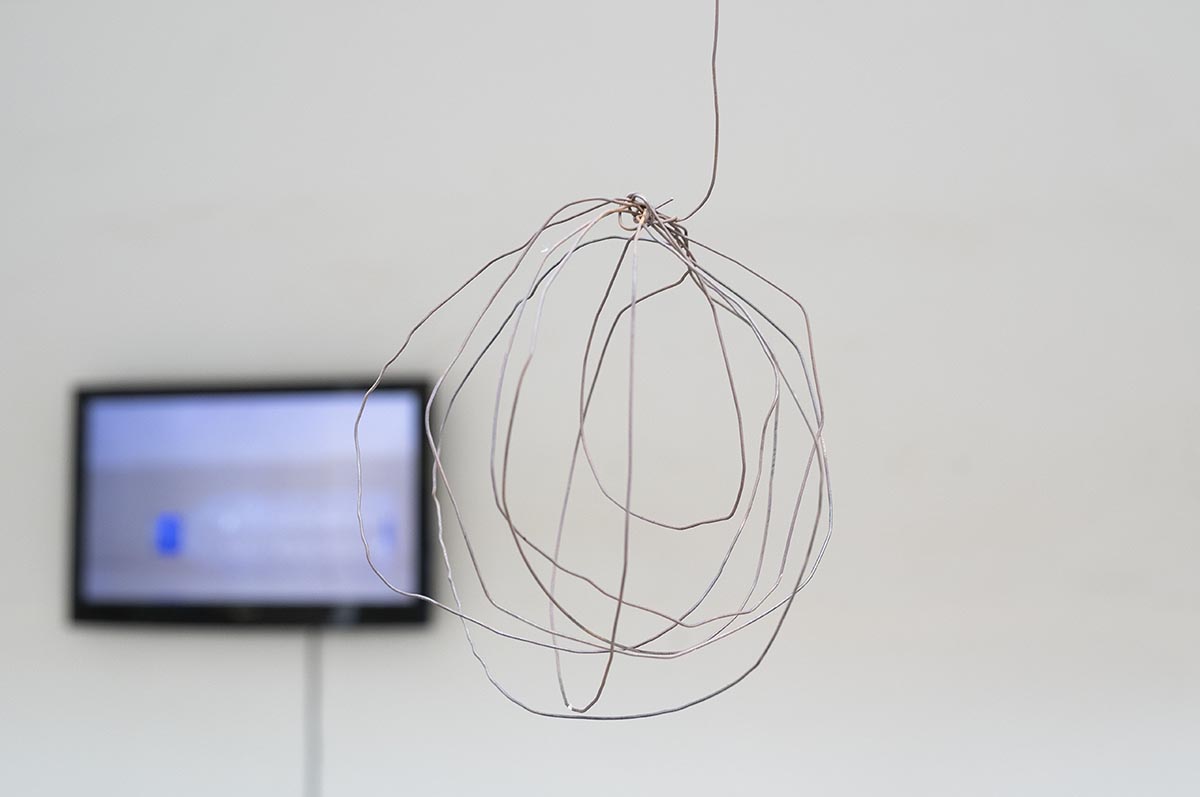 already at the first presentation after our arrival in dakar, we had a lot of interested visitors. the people in dakar are very open-minded and curious. we also had an unexpectedly large number of visitors to our open studio, a presentation format that is not very well known in dakar. the people from dakar and especially from the neighborhood around the cultural center kër theossane were mainly interested in what the sonic explorers did with their research of the city. in what way would the scholarship holders implement their experiences in an artistic work. what does an art work look like that deals with urban sound phenomena?

karima. right at the entrance you could “enter” karima’s work. the floor was covered with sand. there were squeezed plastic bottles in the sand that karima found in the city. she noticed the bottles lying all over the streets and sidewalks, pressed by car tires and the soles of shoes. she simulated the sounds of the pressing process in a video by stepping on new bottles. the video was shown on a flat screen.

karima placed a second work in the jardin jet d’eau (a garden initiated by the operators of kër theossane). a large megaphone hung from the middle of the cathedral-like construction made of metal wire and climbing plants. The simple intervention should encourage visitors, especially children, to push the loudspeaker to play with it in order to distribute the recorded children’s voices in the area.

adremé had prepared his installation in the rearmost room of the courtyard. a kind of homage to the country life in senegal in comparison with urban conditions and urban life. he installed calabashes and other containers in the room. Water drops fall from the objects on the ceiling into the bowls on the floor. the drops fall at different speeds and intensities, creating an interesting composition from the resonating bowls. in addition, a sound track with processed industrial sounds was played to mix it with the analog drip noises. there was also a hidden loudspeaker in front of the room to connect inside and outside.

adremé had the idea for this work when he visited his family home and the rain dripped from the ceiling.

martin was interested in the large mango tree that dominates the courtyard.

from this tree he hangs a loudspeaker chassis that sits under a large water bottle. a contact microphone is attached to the bottle. another microphone sticks to the entrance gate, which captures the creak of the metal door and transmits it into the courtyard. under the hanging speaker there is a round steel frame in which another speaker is installed. the big magnets repel each other. martin tried to find the balance between magnetism, wind and power, to keep the whole construction in endless motion. the situation was supported by its composition of computer-generated sounds and edited urban sounds.

nika also deals with calabashes and aluminum bowls. inspired by the roundabout with the disused fountain and the small round squares so typical of the sicap district. two halves of a calabash are connected to a battery-powered motor to automatically move back and forth. the bowls run against each other and make a quiet rubbing noise. with her object, which resembles a small robot, nika took a tour of the city and intervenes in different places. the movements and the reactions of the city residents can be seen in a video.

in the studio space of kër theossane she showed another work. a sporadically rotating aluminum shell hangs from the ceiling which bumped onto a clapper. the sound is captured by two smaller bowls with integrated microphones. two wall fans also rotate sporadically and ventilate the room, whereby their “patched nose”, consisting of a loudspeaker, reproduces the rudimentary, sensitive wind noise.